Results for the 2018 Ride Season are below.

HIGH POINT OPEN HORSE: By the Grace of God Ridden by: Victoria Whitehead

HIGH POINT OPEN HEAVYWEIGHT TEAM: By the Grace of God and Victoria Whitehead 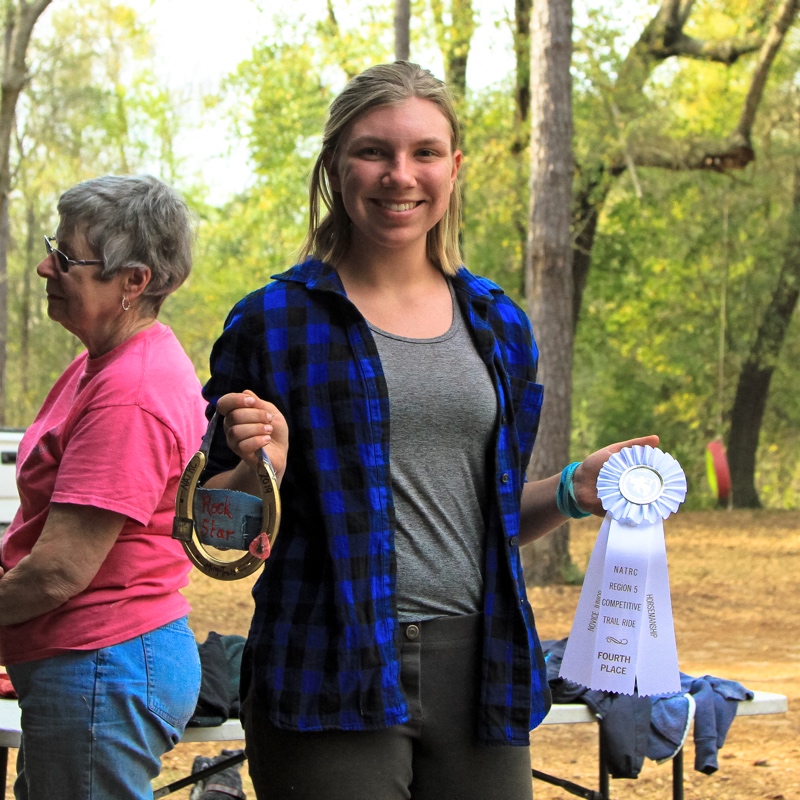 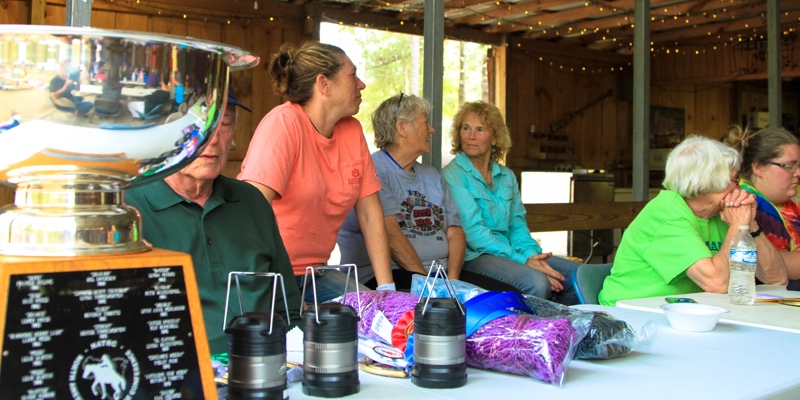 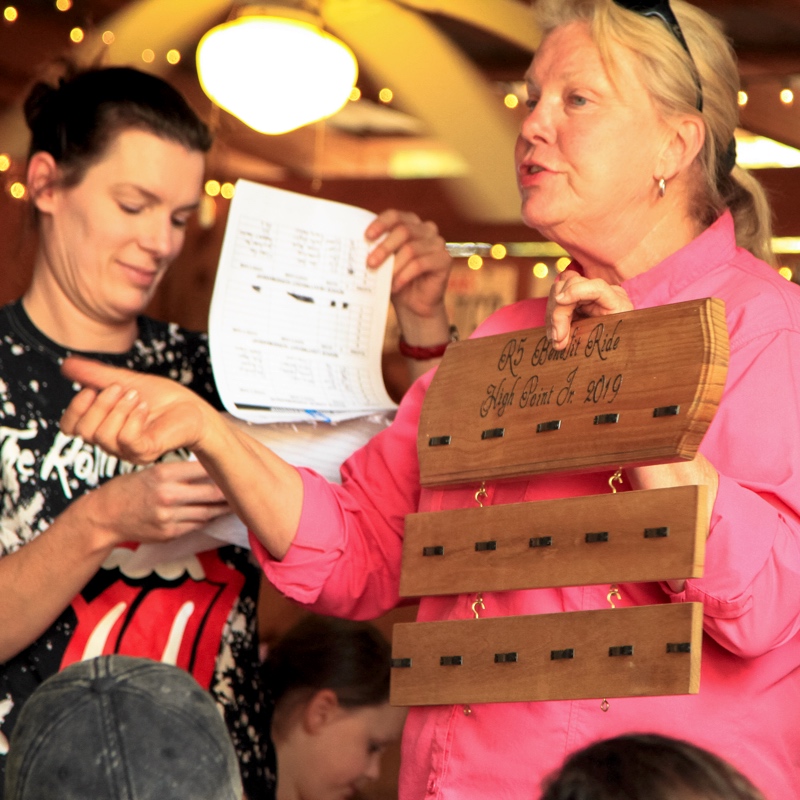 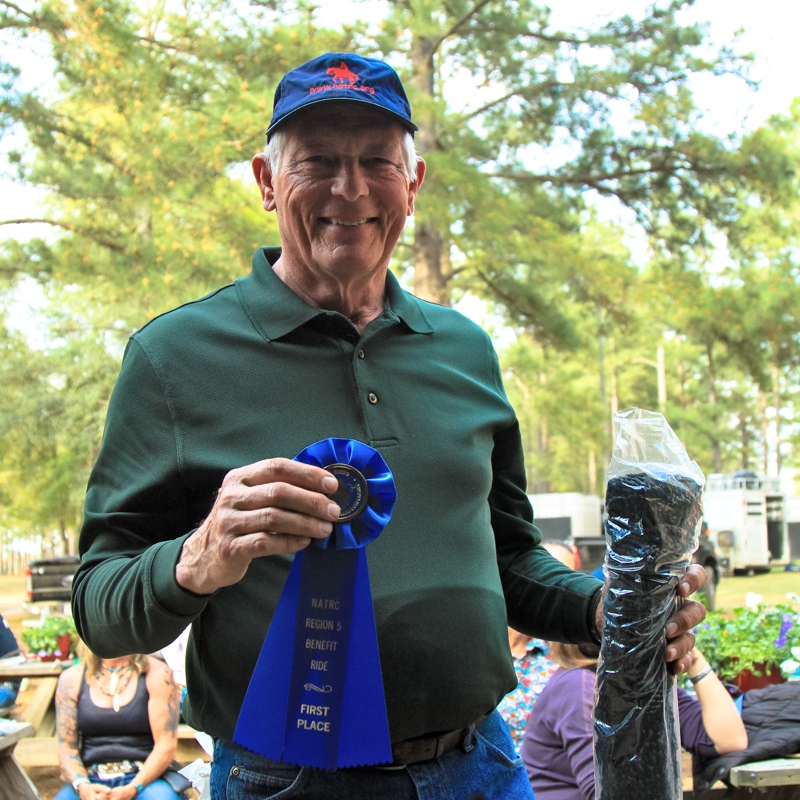 Janna Stanley
(Traveling Trophy donated by Patricia Petelle)
This award is a vintage silver plated champagne chiller with floral design on top rim, handles and base.

Victoria Whitehead
(Traveling Trophy donated by Bill and Vickie Moore)
This award is a bronze bust of a girl cuddling her horse.

Marsha Howard
(Traveling Trophy donated by Kim Cowart)
This award is a bronze cowboy resting on his horse admiring the scenery in the distance.

Poco Rio CL
Ridden by: Janna Stanley
(Traveling Trophy donated by Gary Clayton)
This trophy is a gorgeous bronze bust of a horse.

By the Grace of God
Ridden by: Victoria Whitehead
(Traveling Trophy donated by Paula Riley)
This trophy is a Sterling Silver Vintage Watson Large Flared Vase

Spirit of Spotted Alen and Cindy Keen
(Traveling Trophy donated by Courtney Woodall and Cindy Keen)
This trophy is a large silver and pewter horse cup with fine details including double handles and horse head engraved on side.

No award in 2018
(Traveling Trophy donated by Tammy Lineback)
This trophy is a Working Horse Sculpture by Attila Art Studio. It was cast in crushed stone Hydracal and stained a deep chestnut hue.

By the Grace of God and Victoria Whitehead
(Traveling Trophy donated by Wayne Tolbert)
This trophy is a bronze statue titled ‘The Last Drop, a bronze statue by Schreyvogel. It is a handmade bronze of a horse drinking from its rider’s hat.

Tanya Kingsley
(Traveling Trophy donated by Kim Cowart)
The Jack and Mary Britt Outstanding Service Award is given to a RFTRA Volunteer who has shown ongoing involvement in the improvement of RFTRA and NATRC. The recipient is a person who has demonstrated exemplary dedication to serving the competitive trail riding sport and its participants, going above and beyond assigned duties. While exhibiting a positive professional attitude and high personal character, the recipient’s generous efforts have made a significant impact on the well – being of the sport and on the individuals participating in it. This award is not necessarily given out every year.

Olivia Lord
(Traveling Trophy donated by Gloria Black in remembrance of her daughter, Shannon Black)
This award is an annual award given to a deserving Region Five Junior Member (but not necessarily a current junior rider) who has exhibited exemplary sportsmanship and integrity throughout the year, therefore setting the example of how all persons should behave, regardless of age or gender. For the 2017 ride year that task was really quite simple.

This award recognizes individuals who have attended all rides in the current year, either as a competitor or a volunteer. To qualify, as a competitor, you must have, at a minimum, timed out at the start of the ride. To qualify as a volunteer, you must attend at least one day of the competition, assisting in one of the many volunteer categories listed in the RMS. Attendance at the Mini – Convention can substitute for one ride in pursuit of 100% Club recognition.
Honorees for 2018 include:

The following individuals are being recognized for their contribution to our sport and our region. We greatly appreciate their efforts.

Sallie Kudra
Just to say that Region 5 appreciates Sallie Kudra doesn’t seem quite adequate. Maybe we should add; we admire her, we hold her in high esteem and high regard, we respect her, and most of all, we are grateful for her.
Sallie is a true “long timer” in R5 and NATRC, and she has spent that time wisely, and always on R5’s behalf. We know Sallie as an accomplished competitor whose last 2 mounts, Marno’s Terra Cotta and Terradocs Oconee Belle are a mother/daughter pair of Morgans who account for over 7000 of her almost 8000 miles of NATRC competition. Sallie has also served as: a ride manager, an NBOD alternate, worked on awards, and handled R5 membership with all its many convoluted details. And, if you are an NATRC judge, Sallie is absolutely at the top of your list as someone you want looking after you as a judge’s secretary.
Another definition of appreciation is “to increase in value”. Sallie is an asset who has increased the value of R5 and every year we have a greater and greater appreciation for her contributions. And we are grateful. Region 5 surely appreciates you Sallie, and we thank you so very much.

Nancy Sluys
Nancy Sluys is a friend to NATRC and especially Region 5. She has given of her time and resources to this organization for well over 25 years. She and Bill have sponsored National Championship ribbons for many years.
Nancy has managed innumerable rides in Region 5 over that span of time as well; taking over the Uwharrie ride when the management faltered, then taking over the Virginia Highlands ride when management was needed to keep that ride going. Nancy changed the venue of Virginia Highlands CTR to her exquisite Triple C property thereby giving Open riders a chance to see and ride the Rangeland. She put the 2018 Virginia Highlands ride on after just having broken her wrist while competing in the Old Dominion endurance ride the weekend before.
An accomplished artist, musician, trail advocate, competitor, rehabilitator of “lost” cause horses and overall exemplary human being, Nancy is a slam dunk for this appreciation award.

Andrew Murray
When we raise our children in NATRC, the old saying, “It takes a village to raise a
child,” becomes a foretold conclusion. That’s just what Andrew Murray became; a youth emerged in the principals and love of horses that our sport encourages. His character, devotion to friends and family, and skills developed through years of participation in Region 5 exemplify all that is good about our sport.
Most of the old timers remember Andrew as a child jumping on the running board of the trucks as they arrived in camp on Friday. He would put out a sign, “Coggins Checked Here”. Then he would take your paper and jump up on the fender of the trailer to check the markings on the horse to be sure they matched. Andrew took this responsibility very seriously.
As Andrew grew so did his responsibilities with Region 5. He has served on the regional BOD, worked any and all jobs during rides, and brought many young people into the sport mentoring them through whole ride season.
Andrew is an example of one of our fine people who have grown up in our NATRC family.

Bill Moore
We are very fortunate to have Bill as one of our extremely active Region 5 members who continues to strengthen his commitment to this sport through his numerous roles: Region 5 BOD president, a National BOD member, ride manager (Christmas in the Pines), New Rider Clinic Organizer, and a successful and consistent competitor.
One of many of Bill’s positive traits is that he gives his consistent dedication and time to mentoring and encouraging new riders and building this sport. Many have witnessed his mentoring and encouraging first hand when he is working with new riders at clinics, on the trail and around camp. His positive and friendly attitude along with his energetic encouragement he gives to his fellow NATRC competitors is refreshing and highly respected.
In a day and time when people come and go in this sport, Bill has remained a constant figure in improving NATRC. Bill is committed in creating a stronger platform for NATRC to be successful.
It is with heart-felt appreciation for so many of us to know that people like Bill Moore are actively giving their time, commitment and expertise in improving our organization, our beloved sport, and all that it means for all of us. 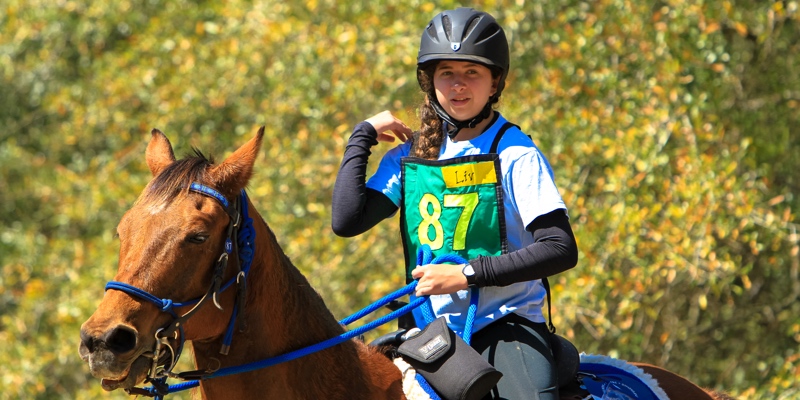 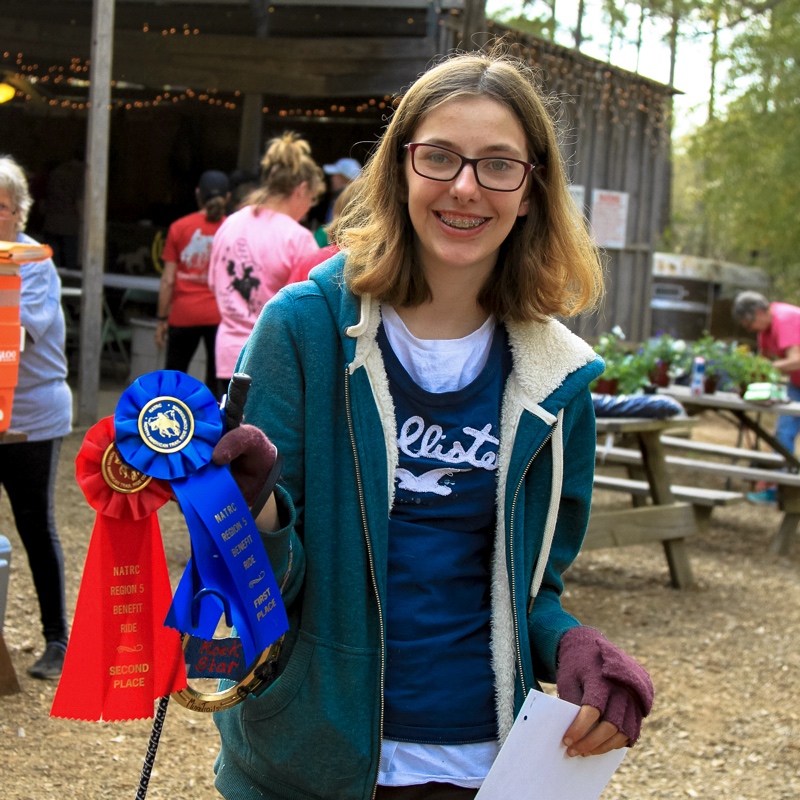 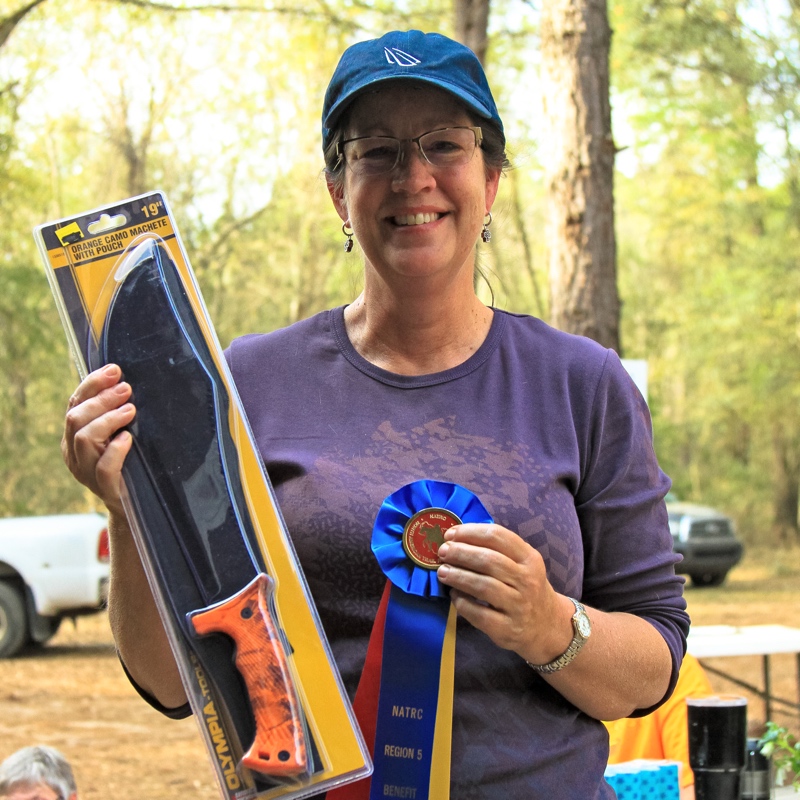 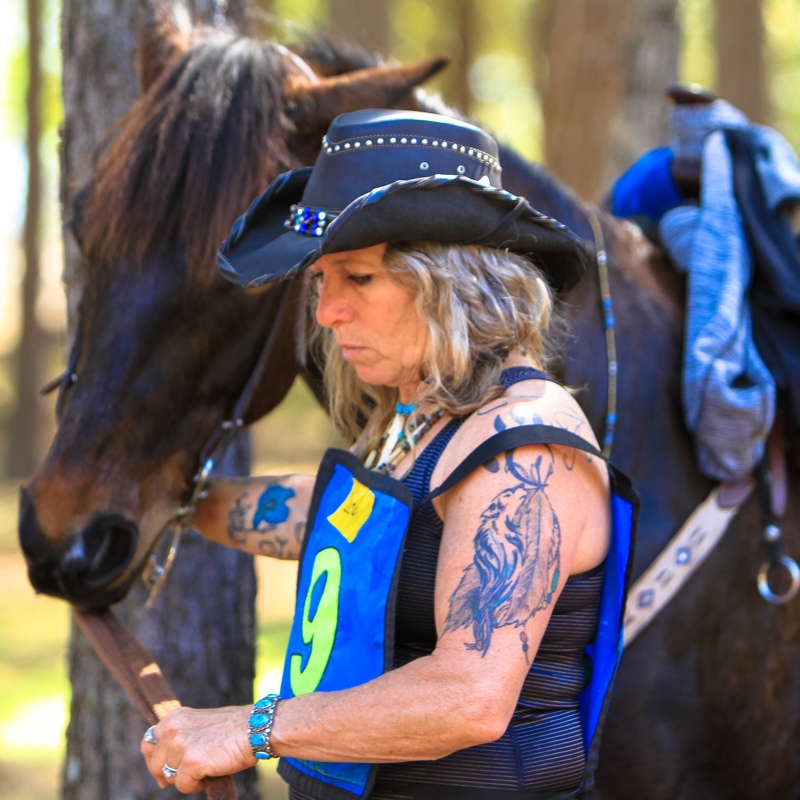 “We’ve caught another fish, boys.” were the first words Mike heard as he approached Dr. Larry Bentley and volunteers at an NATRC competition in 1977. The following weekend it was on to the Brickhouse Campground in Sumter National Forest, Mike’s first competitive ride with NATRC.

Mike ultimately rode over 5,000 miles, obtaining several National Championships on various Arabian mounts during the course of his competitor journey. Mike is probably the only competitor in NATRC’s history to begin a competition with 50 points being deducted from his horsemanship card. His dear friend, horsemanship judge Mary Britt penalized him for riding without a girth. Undeterred, he pursued the finish line, knowing that bonding with both horse and fellow competitors was the true reward.

It was at an NATRC competition that Mike met Polly Johnson and as a result, a respected team of both horse and horsemanship judges was formed. This husband and wife team continued until Polly’s untimely death in 1982. The Polly Bridges Award was established as a memorial to her influence and dedication to the sport, and continues to be a coveted national award.

Mike has worn many hats over his years supporting NATRC. He managed and judged the Edgemont CTR held in the Pisgah National Forest for over two decades. The Edgemont CTR was formidable and thought to be the toughest ride in Region 5. Reliving those days, flight or fight tales are still shared around campfires. With Mike judging, he and Mary Britt co-managed the very first Kings Mountain State Park CTR. At that ride, he always donates his judging fees back to the organization. For Mike, it has always been about the love of the sport and NATRC family, not the monetary gains.

Mike has used his many talents throughout the years – first as a volunteer, then a competitor, ultimately becoming a veterinary judge – all the while believing strongly in NATRC’s philosophies. He has served on the Judges’ Committee and has been active in helping develop the criteria for the CRI being implemented now. He also helped to create the very first modern score cards used in NATRC.

Dr. Bentley was never more right when he said, “We’ve caught another fish, boys.” Forty years later, he’s still on the line and our sport and organization have been the beneficiaries of his dedication and participation.

We’d love to share our New Competitor information with you.

How to JoinI'm Ready to Join